What I believe and Why I paint what I paint.

I've been praying about the personal attacks since they started... well every time I do or say something publicly or on facebook that I feel is a direct leading of God to do, yep someone attacks me.  And I don't actually do much that is controversial. Just mostly, I  paint animals.

My calling  is to bless people with my art.  Jesus even instructed us to bless those who didn't believe him. So  even in my imperfect little life  in my sweet little town filled with imperfect people that is exactly what I am striving tirelessly to do every single day that God allows the breath to stay in my body and my heart to beat.   And guess what..  It is only going to be done when He says it is done. 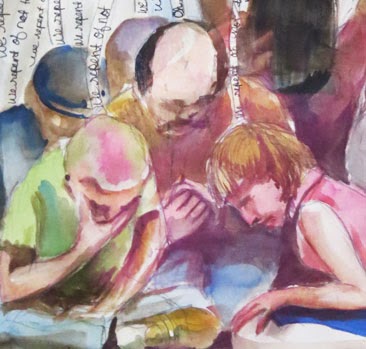 Oh, yes, I do get discouraged. And sometimes I have to make myself paint or sketch or draw because of it. But hey, that is everyone's life, not just mine.

This week much to my dismay and distraction.. a "good Christian"  did not like my answers on a certain political debate involving "religious" freedom and instead of asking  me the question, " What do you think about ________?" or "Do you support _______?" The person proposed a hypothetical thinking that I would show my hand on what I would do in a certain circumstance if I had to choose between what the established church said and what people who opposed it said.   I said basically in all things I would seek to do "God's will" in each circumstance. 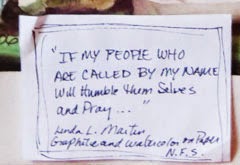 Big mistake on my part... because what I actually did was to answer a hypothetical statement that really has no baring on faith or on what God might have me do in any circumstance. And you know what? It is actually outside the will of God and what the Bible says to even worry about those hypothetical things.  God promises to put the words in our mouth that He wants us to say in any given situation when we trust him.    I was distracted... yeah, it took me two days to figure out what had happened and what I did wrong. And it is not like I didn't know.I just didn't expect it to come at me from  that unexpected direction. Whew. Hopefully I will be more vigilant in the future.

So when ever you answer those questions, and make no mistake they are manipulative, it pretty much always  gets you into trouble; because, it is pretty much meant to trip you up. Thus any response you give  will either make you feel stupid, or guilty or to shame you into changing the way you think and often it will target you and open you up to abuse.   I am going to tell you that any person who puts you into that situation is trying to control you.   I , personally, seriously felt violated,over interpreted and totally misrepresented and need I say victimized?

So over the next few days I am going to share with you 4 mixed medium paintings I prayerfully painted in 2006 that say exactly what I believe.   There will be no arguments.  No heated discussions. It is not meant to be offensive.  I am just sharing my faith with you, which is a constitutionally guaranteed right in my country.  I am doing it with the hope that you will understand why I love God so much and How much  I wish everyone knew how much he loves all of us.


Don't miss Signing up for the
LLMartin Artistic Services Newsletter